Thursday 10th November marked the sixteenth anniversary of the killing of ken saro-wiwa and eight other activists in nigeria. on the 9th, shell, complicit in their execution, was polishing its image by sponsoring an awards event for young entrepeneurs at the centrepoint building in central london. london rising tide organised a reminder of shell's bloody history outside the event, involving grim reapers, sombre drums, and hundreds of leaflets.

after meeting and dressing just round the corner, a dozen or so activists arrived outside the centrepoint building, creating quite a stir with a morbid beat from two huge surdo drums, several ghostly shell logo skull-faced grim reapers, and an excellent banner using the shell and livewire logos and the slogans "shell livewire - supporting bright young business, shell deathrope - hanging outspoken young nigerians".

centrepoint security at first overstepped the mark, pushing people and trying to snatch the banner, but they retreated indoors and closed off the entrance when they realised they were being filmed, allowing the protest to continue right outside. 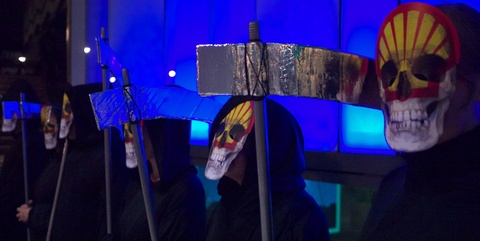 hundreds of leaflets were handed out to interested passers-by, and police, who arrived after around 40 minutes, waited for instruction up the command chain before deciding to leave the protest alone.

after about 90 minutes, with leaflets running out, and the young entrepeneurs apparently led out of the building via an underground car park, it was off to the pub for a well-deserved drink for the activists. 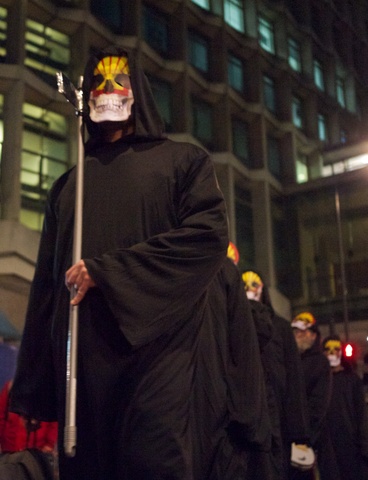 it was on the 10th november in 1995 that the nigerian government hanged ken saro-wiwa and eight other young activists who were campaigners against the devastation caused by shell and other oil exploiters in their homelands. shell was later shown to have been complicit in the murders. to this day, shell still attacks communities (like rossport in northern ireland, as well as continuing abuses in the niger delta) and destroys the planet through oil extraction, and to offset their destructive image they put tiny amounts of their profits into high profile sponsorship events like 'livewire', a youth business enterprise.

For more great photos check out http://london.indymedia.org/articles/10935 (thanks Rikki - rikkiindymedia(At)gmail[dot]com).

Shell Death Rope - In Memory of Ken Saro-Wiwa from You and I Films on Vimeo.

Here is the text of the Leaflet -

On the 9th of November 2011 at a Shell-sponsored awards ceremony in the swanky corporate offices of the CBI (Britain’s biggest business lobby group), young entrepreneurs are looking towards a bright future.

Sixteen years ago, Shell made sure that Ken Saro-Wiwa and eight other young Nigerian activists had no future. On 10th November 1995, Shell was complicit in their execution at the hands of the Nigerian military government for campaigning against the devastation of their homeland the Niger Delta by oil companies, in particular Shell.

And every day, all over the world – from building dodgy pipelines in Rossport, Ireland, to mining the world’s most polluting oil from the Canadian tar sands – Shell’s oil exploration and extraction activities undermine our collective future by pushing us ever closer to the brink of climate catastrophe. At the same time, it rakes in billions in profit every month, while the rest of us struggle to get by.

Shell doesn’t want us to remember these horrific things. So it channels a miniscule fraction of its obscene profits into sponsoring events like Livewire – not to mention most of the major arts and cultural institutions in London.

That’s why we’re here tonight: to remember – and to resist.

The hanging of Ken Saro-Wiwa and his Ogoni colleagues – whose only crime was to speak out for environmental and social justice – caused shock and outrage around the world. But whatever we might like to think, the human rights abuses perpetrated by Shell continue to this day. Shell’s routine payments to armed militants exacerbate armed conflict, and oil spills and gas flaring continue to devastate the fragile environment of the Niger Delta and the lives of the people who live there. But resistance continues as well; the UN has issued a damning report on the ecological impact of oil spills in Ogoni, and Shell was recently forced to admit liability and pay out millions of pounds in compensation for two massive oil spills after a lawsuit filed in London.

Sponsorship: buying us off

Sponsorship of events like Livewire is one of the most important ways Shell tries to protect its reputation and buy our acceptance. By sponsoring a social 'good' like an award to help young entrepreneurs, the oil giant is able to represent itself as a responsible organisation, and distract our attention from its environmental and social crimes around the world. By being here tonight, we strike a blow to Shell’s precious brand, chip away at Shell’s powerful position in our society, and move towards the day when Big Oil – like Big Tobacco – is no longer seen as a socially acceptable.

Climate change may have disappeared from the news recently, but that doesn’t change the fact that it is already claiming 300,000 lives a year. Glaciers, permafrost and sea ice are disappearing. Sea levels are rising, seasons changing and extreme weather becoming more extreme. As temperatures rise, we’ll see more flooding, more drought, more disease, more famine and more war, creating hundreds of millions of refugees and causing the destruction of entire ecosystems and species.

We can’t afford to forget about climate change – or the fact that companies like Shell are at the heart of the problem.